In retrospective
A nostalgic look backwards

This page looks to uncover some interplay between my past and future, the threads of character and interest, the patterns of experimentation that map my personal, artistic history.
Museum of Applied Arts
​Introduction to the Exhibition - Gordana Vidakovic, Art Historian

In the beginning there was clay; omnipresent, simple and formless. Then, between the artist’s fingers and visions, ceramics is born. But for the artist, Ivana Tatomirovic Starcevic, that is not the end of the work... Driven by her unrest and curiosity, as well as by need to envisage, embody and promote her own way of expressing herself, Ivana has not confined herself to the specific boundaries that are imposed by the very nature of the ceramics. Having mastered its technology and traditional forms, she shifted her interest to a vast, yet unexplored field, where various and complementary, but also often mutually incompatible techniques, means of expression and arts meet and intermingle: the crossroads of ceramics, photography, graphics, sculpture and painting. This exhibition testifies flamboyantly to Ivana’s striving for unification of arts and non-eclectic synthesis of various modes of artistic presentation.

In her works, the basic procedure is that of transposing photography onto ceramics, by means of silkscreen printing. Several photographic models appear as leitmotifs on most exhibits, reflecting Ivana’s almost obsession; attachment to those elementary, but somewhat poetic, and deeply moving features and images; a plowed and injured soil, poignant stones, rapacious clouds, blissful skies, and lonely, but defiant tree...

Special effects are created by manipulating the photography, that is, magnifying its most vital parts, and constructing the intriguing juxtapositions. Furthermore, Ivana does not hesitate to interfere with the primary composition, deliberately breaking the apparent harmony and amorphous simplicity, and introducing an element of commotion. Thus, she supplements the photography with multifarious, often three-dimensional motives and devices, made of stone, porcelain, ceramics and textile, which establishes an illusionary, spatial and visual, symbiosis between photography engulfed by the ceramics, and various plastic components.

Ivana also likes to play with colors, which are presented in a quasi crescendo fashion-at first, directly inserted, than given with more and more zest, and finally, in few pieces, poured over with exuberance and full eruptive potential.

If one had to pronounce an opinion about the trend and style which Ivana most closely adheres to, thus attempting to define her art, it would be a mistake not to see it as expressive and idiosyncratic, lyric fantasy, not unfamiliar with the idiom of pop art.

Unshakably cosmopolitan, irreversibly modern and strikingly innovative, Ivana has also succeeded in preserving and enriching some of the ceramic tradition, which echoes the continuity of ceramics over the span of several thousand years. 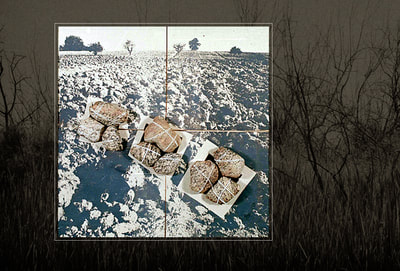 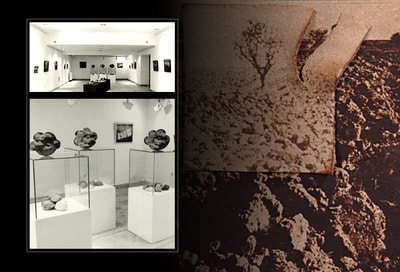 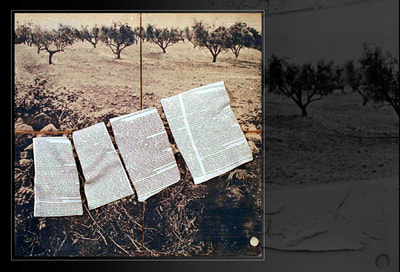 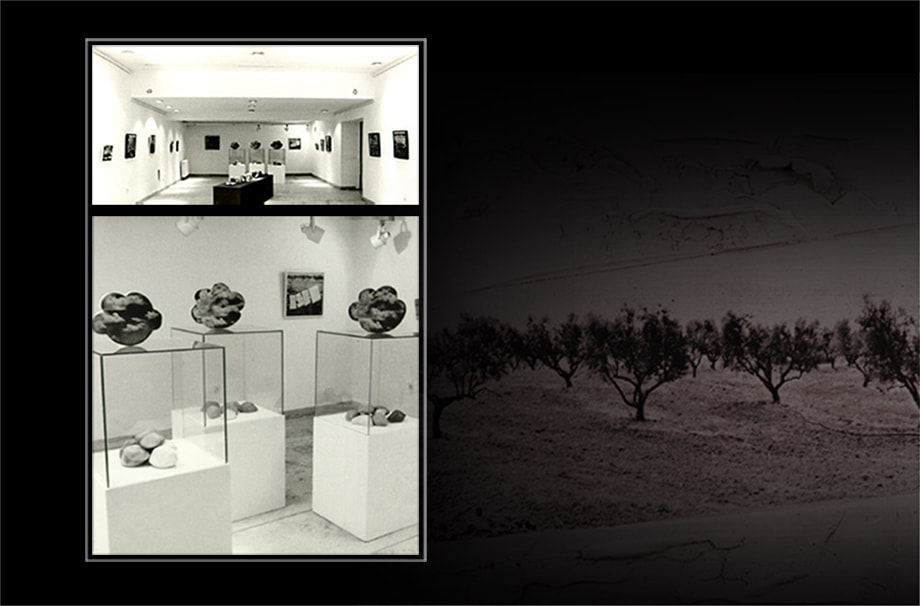 In the works that she has prepared for her first solo exhibition, Ivana Tatomirovic presents herself as an artist who, in addition to undeniable talent, possesses several other qualitative characteristics that are important. A happy union of a curious, creative spirit, extensive knowledge of materials, and mastery of her craft have led Ivana Tatomirovic to a multifaceted approach to material and exploration of different possibilities within the medium itself.

In her works, Ivana Tatomirovic synthesizes experiences gained in painting, sculpture, and graphics artistry. These lessons are only part of the daily artistic practice of a contemporary artist in a sphere where it has become a natural necessity to adopt a multi-disciplinary approach to art.
​
Ivana Tatomirovic is attempting to achieve multiple goals at the same time. In a new context which she has created, she incorporates photographs of well-known models from the classical art era along with typographic marks. These marks, as well as the transposed Venus, have the character of a picture. In addition, the author opens space by dividing it into square fields and introducing new plastic elements, such as drapery, leaves, and stones.
Finding her own challenge in ceramics, this artist examines more aspects, such as the possibility of using photography and applying graphic techniques, and seeks new meaningful values. Through this process, she matures as a creative artist. 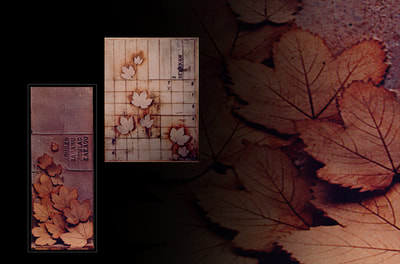 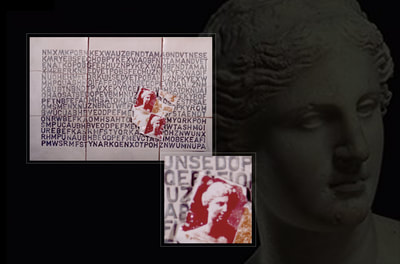 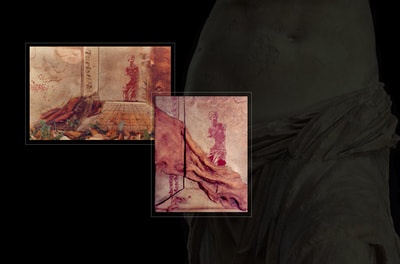 Faces of the Earth - Trails

To join the unjoinable, to outgrow previous experience by a small foundational step that is being built into the grandiose Tower of Babel of civilization, is a challenging job for anyone who sets sail in the wondrous waters of artistic creativity. On this path, many stumble, fall, become cynical, turn against the world and themselves, and begin to deeply hate what they're doing, and to masochistically express their sick "love." However, on the other side of the great prism of creativity, easily and like ballerinas, step those few in number who respect themselves, love life and the world, and whose works sound like a polyphony to human beings. The joie de vivre with the human being as the creator and center of the universe pours out of the works of Ivana Tatomirovic, and awakens the hope that the obnoxious, dirty, and evil can be left outside of this world. They certainly have been left out of Ivana's world.
The ceramics in the classical union of the four basic elements of the universe (Earth, Water, Wind, and Fire) symbolically, in its essence, implies the cleansing of the being of the soil. By going through the enlightened hands of the master artist and then through fire in the kiln, it closes a seemingly hermetic circle, to which little can be added or taken from. To ennoble and almost impregnate a lump of amorphous, shapeless clay can only be done by a great artist, a true lover of their art. To reshape the soil into a new reality can only be done by a true wizard. I am glad to be dealing with one at this time.
Regardless of the fact that photo-ceramics is not new, the new thing is that Ivana Tatomirovic is the first artist in former Yugoslavia who produces fantastic results using these techniques. By conquering, from the first attempt, the symbiosis of clay and screen printing, she keeps moving forward and explores, in a very disciplined manner, the possibilities of affecting her works of art by using the building and decomposition of the basic artful and functional components of her works.
The most impressive of all is Ivana's approach to photo landscapes that have already been processed, where the work of the anonymous farmer radiates symbolically out of the fields and orchards with the titan-like power of love towards the Earth, the Mother, the ancient birth-giver, Gaia. Towards those landscapes, which have already been deeply imbued with drama, Ivana enters with porcelain elements, inscribing a trail of herself, or her time, and of the sense and nonsense of fighting against nature.
"From dust you came, and to dust you shall return" - this is what I gather from her works. However, between those two states, there is a small or large space for you to write down your attitudes and beliefs, thereby preserving it for others who are yet to arrive.
In the works of Ivana Tatomirovic, I recognize: the screams of ultra-realism, the reduction of land-art, the adoration of the object of pop-art, the shivers of informal art, the gritting of teeth of the Dadaists. I even recognize the Japanese way of relating to materials and the highly disciplined, professionally precise, Scandinavian-style relationship with the medium; without the Balkan chaos, of which we are often proud for no good reason, but with the subdued warmth that radiates from the Earth, which is surrounded by an array of both obvious and archetypal symbols.

According to A. Block, an art critic has a sacred duty to predict the future direction of an artist. Here is what I think about that. From her past works it is obvious that Ivana Tatomirovic has brilliantly played her first great solo game, and she will not be staying with photo-ceramics for much longer, except in special cases where she needs to analyze some interventions which, according to her temperament, have to be stronger and more expressive. This will also be reflected in the destruction of plans and the addition of more intense rhythms to the basic composition. Ivana Tatomirovic will then be increasingly interested in structures, textures, and ceramic objects that may even resemble ceramic dishes, but will always remain within the confines of rudimentarily understood masses and symbols.

Ivana Tatomirovic is an artist of an extraordinary provenience. Her two-dimensional ceramic works, which incorporate elements of painting and photography, challenge traditional notions of dimensionality and blur the lines between two and three dimensions. This innovative approach to ceramics art not only expands the possibilities within the medium, but also breaks free from the constraints of function and utility that are often associated with ceramic art. Through her unique and boundary-pushing technique, Tatomirovic has secured a prominent place for herself within the contemporary mixed-media art. 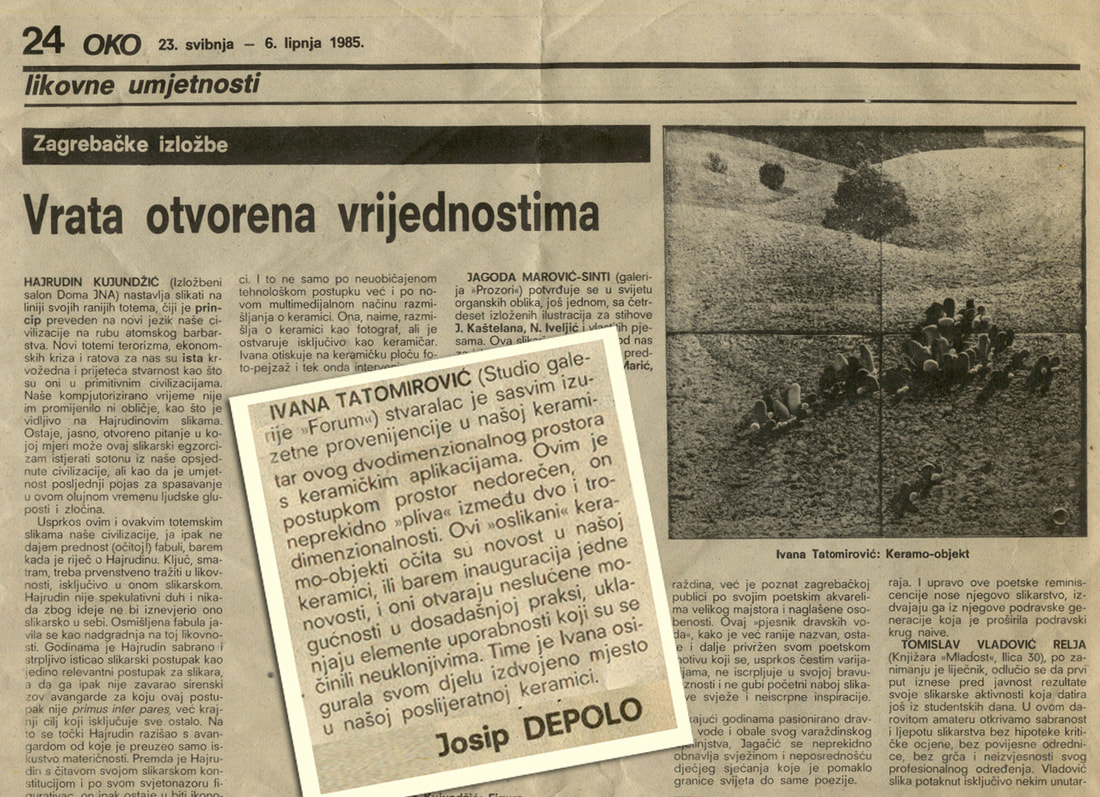 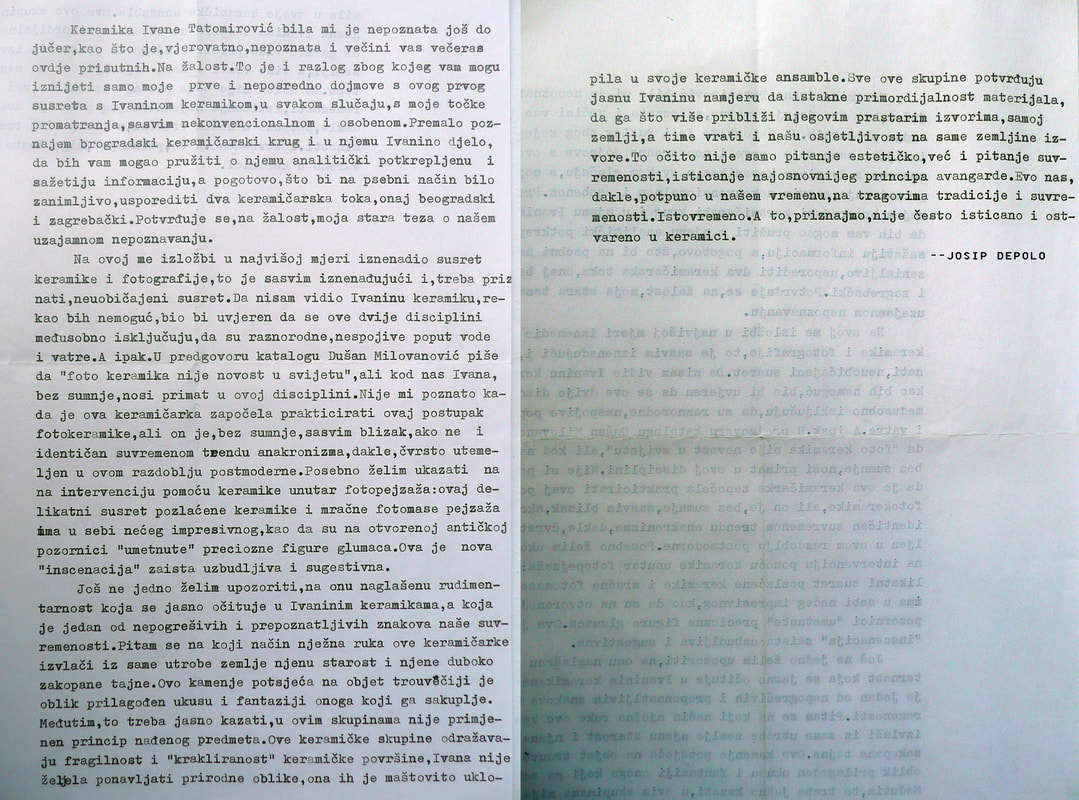 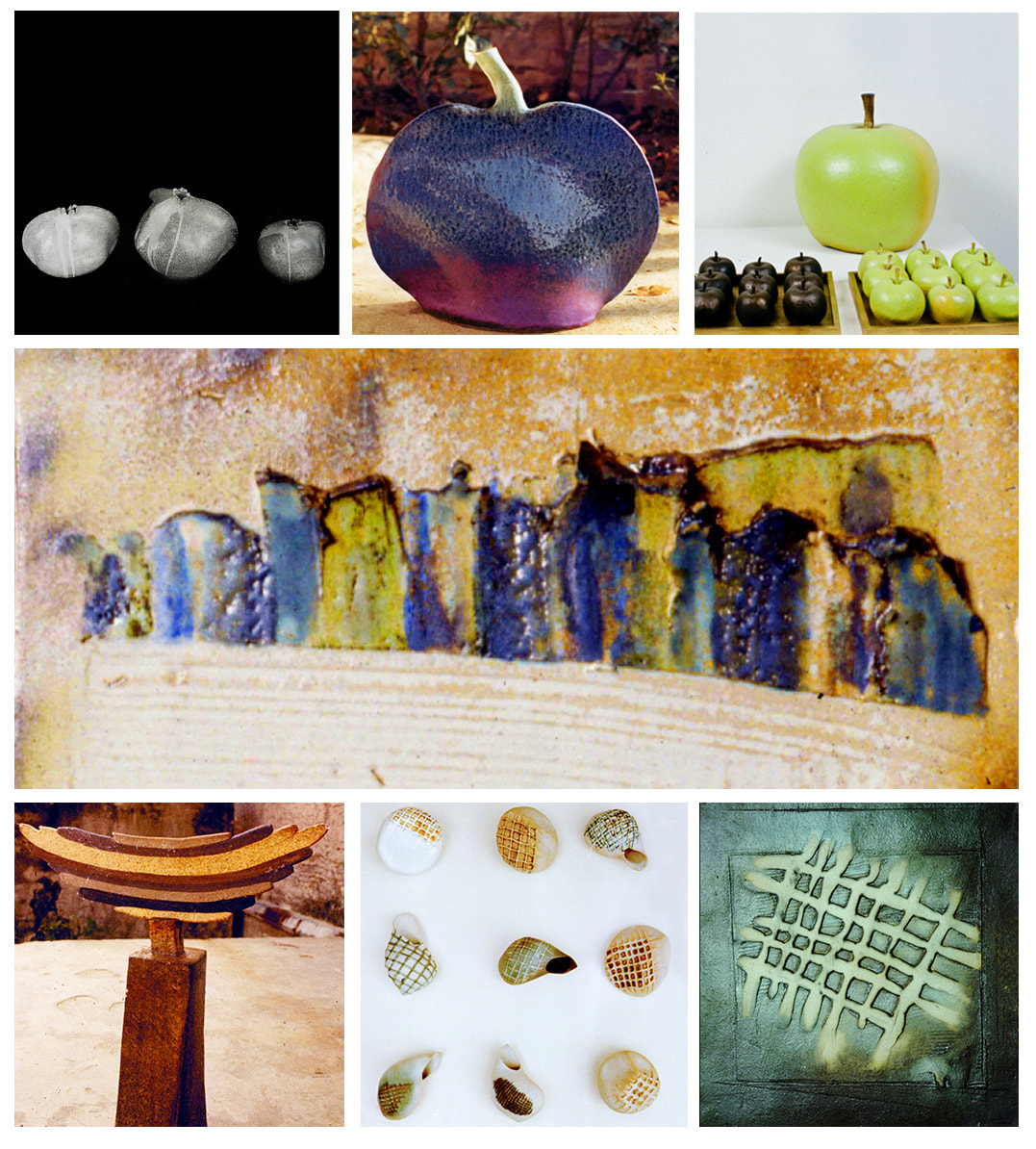 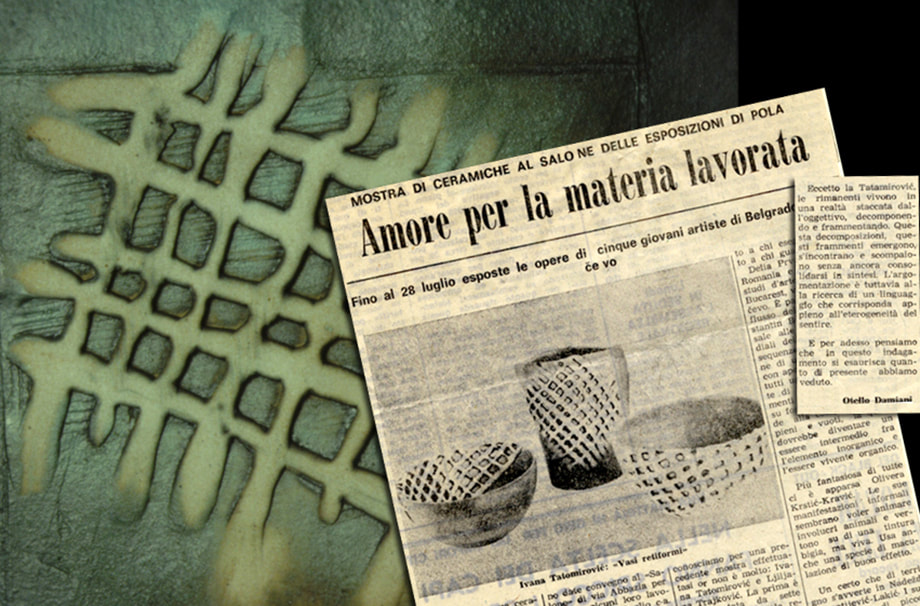 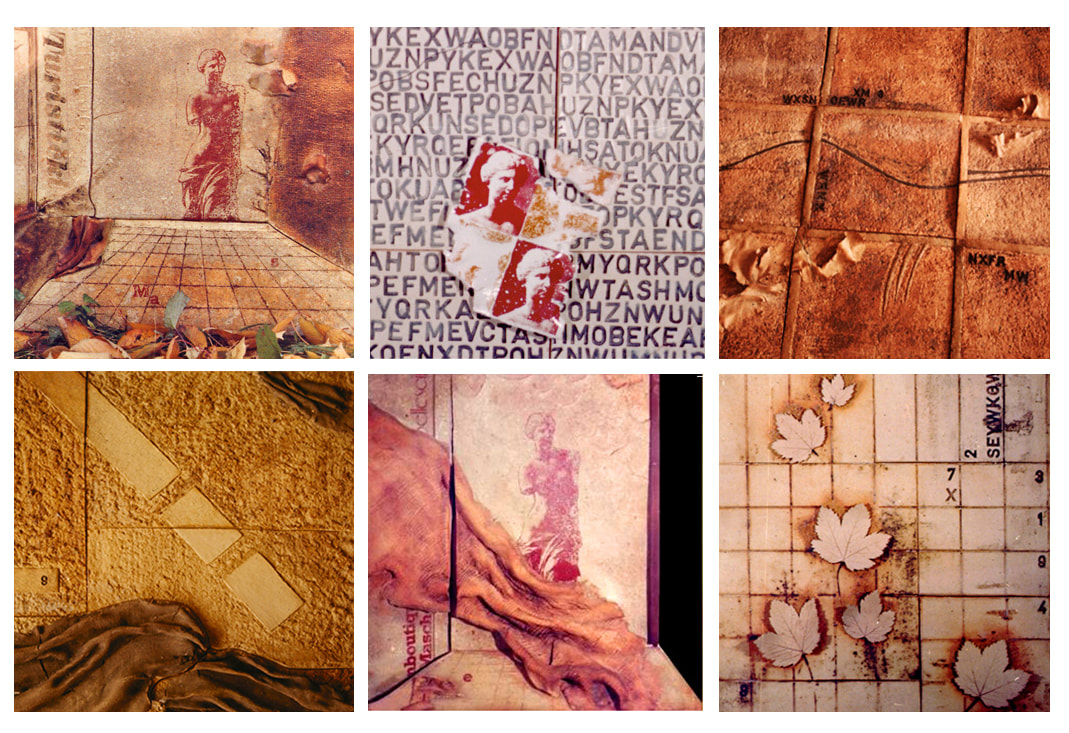